Sexual Harassment: What you Need to Know!

To view a complete recording of this class click here What Can Businesses and Employees Learn From Hollywood’s Sexual Harassment Problem?

Harvey Weinstein . . . Al Franken . . . .Kevin Spacey . . . Aziz Ansari . . . .Louis CK . . . . Garrison Keillor . . . the #MeToo Movement . . . These stories and countless others like them have caused an enormous change in how sexual harassment is viewed in America, and how it is addressed by employers and employees. What can the rest of us learn from Hollywood’s Harassment Problem?

This course is literally as timely as today’s headlines! We will be discussing in detail the implications of the recent explosion in sexual harassment allegations against prominent celebrities, businessmen, politicians, and judges – yes, Judges. Attendees will learn what each of us can do to make sure that we and our companies are not in the news ourselves – six weeks, six months, or six years from now.

Among the specific topics we will analyze and discuss are:

Steve is a native of Cincinnati, and earned his law degree from Georgetown University in Washington, D.C. He has been in private practice since 1987, beginning his career with the Cincinnati firm of Taft, Stettinius & Hollister.  Before joining the Finney Law Firm in 2016, Steve was a Partner at Katz, Greenberger & Norton in Cincinnati, where he was in charge of the firm’s labor and employment law practice.

Steve is an experienced trial lawyer who has conducted more than 60 jury trials in numerous State and Federal Courts, involving discrimination, harassment, and other employment issues.  He has also won several cases at the highest appellate levels that have helped to shape the current state of employment law.

Steve lives in the Mt. Washington section of Cincinnati, and has three children. 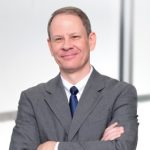