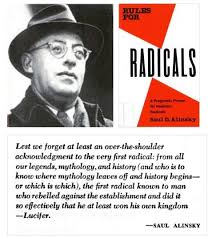 To view a complete recording of this class click here. “Alinsky is this country’s leading Hell-Raiser.   No one has more experience or has been more successful than Saul Alinsky.”—The Nation

Join EmpowerU Managing Board Member Dan Regenold who will be speaking at the Northern Kentucky Tea Party Meeting starting about 7:15 PM–all are welcome.  You will be immersed in a lively discussion as he repeats his Fall 2017 class on the much talked about Saul Alinsky in Kentucky.  Alinsky is generally considered the founder of modern community organizing and is often cited for the success of the Democratic Party under President Barack Obama. In the course of his lifetime Alinsky has received much praise and criticism for improving the living conditions of poor communities across America. William F. Buckley, Jr. said in 1966 that Alinsky was “very close to being an organizational genius.”

(date mentioned in Video is not correct)

Specifically we will look at Alinsky’s 1971 book Rules for Radicals. Rules for Radicals was written as a primer for how the “Have-Nots” could take away power from the Haves. What are the 13 rules Alinsky outlined? How can Alinsky’s rules be used to accomplish goals that you or your organization have? Are they just rules for Radicals and the European Socialists or do Alinsky’s rules apply to Conservaties and others? Join us for our great discussion and video on what Alinsky refers to as “A Pragmatic Primer for Realistic Radicals”.   Be ready…you are going to have to work hard at this class!

Dan Regenold, first became active in Government in 2003 when he became involved fighting Eminent Domain and helping stop it in  Evendale and in Norwood, Ohio. In 2006, he was one of the founders of WeDemandAVote.com which successfully fought and stopped, by ballot initiative, a sales tax increase in Hamilton County, Ohio. Later WeDemand stopped Red Light Cameras in Hamilton County. Regenold spoke at the CPAC Convention in 2008 to discuss major Grassroots initiative actions across the United States.   In 2010 Regenold was of three leaders of the initiative to End Ohio’s Estate Tax which happened in 2011. The Tax Foundation called the repeal of Ohio Estate Tax one of the most important Tax accomplishments of 2011. In 2011 Regenold founded EmpowerUOhio.org (now in it’s 14th semester), a Free University offered in the Greater Cincinnati area with the goal of “empowering” citizens.   Regenold is CEO of Frame USA, Inc. in Springdale. 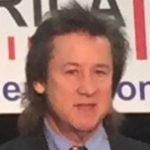