To View a Complete Recording of this Class Click Here

America Hero Bob Doolan turned 100 in March, 2017.  He will tell you he isn’t a hero, that he didn’t do anything anyone else wouldn’t do, you decide for yourself if you agree. Did Bob get his St. X ring back? Come and hear his story of war and survival. Bob’s unit went to England where they flew missions over Germany.  On Bob’s last mission (8-12-1943) his plane was severely crippled and had to land in a field in Holland.  Members of the crew, who were able, left the plane in groups of two or three and they scattered.  The first night Bob and his companion were able to stay at a Dutch farmer’s barn.  Here they were given civilian clothing that made them appear to be poor workers trying to get to a work area.  Bob had one item he treasured dearly “his St. X ring”.  He gave it to the farmer because it would be a dead give away that he was an American.  Bob hoped to get to Spain (over 500 miles to the south) with the help of the Dutch Underground.  Unfortunately, he was captured by the Germans, after which he was questioned by the Gestapo and later put in prison for several days.  Finally, he was sent to a POW camp run by the Luftwaffe (German Air Force).  This camp was the same one on which the movie “The Great Escape” was based.

Bob Doolan grew up in Price Hill, attended Holy Family Grade School, and graduated from St. Xavier High School.  He attended the University of Cincinnati, graduating with a degree in Civil Engineering. An early interest in flying led to Bob’s traveling to the West Coast where he earned a pilot’s license just before WWII.  After Pearl Harbor, Bob re-entered the Army Air Corps and became a navigator of a B17 bomber.  While training in Kansas, he met a girl who would become his wife for over 70 years. After being liberated by units of General Patton’s Third Army, he returned home to Cincinnati where Bob and his wife raised their family, a son and two daughters.  He served 25 years as a Scoutmaster of a troop St. Antoninus Church was sponsoring. Bob has always been active.  He has been a member of the Dunham Choraliers and has given various presentations for the Lifelearn Program. 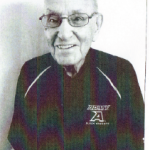